And come check out the greatest show on Earth! This time around we shed some light on the Battle Colosseum, the final KIMOKIMO CUP results, and two VERY important announcements regarding our future Kickstarter updates!

First off we introduce a place at the heart of the Mighty No. 9 story, an arena where sparks fly off metal fists: the Battle Colosseum!

The Battle Colosseum is a free-for-all robot combat arena. The spectacle is sponsored by the government as a way to further advancements in robotics.

Victors of these battles gain access to a massive coffer of research funds, and a mess of special privileges to boot! The event also garners plenty of support from the masses, acting as a modern bread and circus (or a place to make a quick buck).

There are all sorts of robot fights outside of this event--high-speed races, endurance contests of pressure or cold. But none are as popular as the high-octane combat of the Battle Colosseum! Beck and the other Mighty Numbers are a popular team on this fighting circuit.

Let’s turn it over to Battle Colosseum designer, Art Director Shinsuke Komaki for a bit more on this futuristic fighting ground! Take it away, Komaki-san!

Komaki: The Battle Colosseum is both symbolic of and an essential component to the Mighty No. 9 world. This world runs on new socialism, trading up thrills and amusement for a world without inequality. In such a world, the Battle Colosseum is one of the most popular and exciting forms of entertainment, and the data collected during the event is invaluable for technological progress. That’s why we envisioned the arena at the very center of the city, from which the metropolis radiates outwards.

While many futuristic stories show starry skylines, we wanted to give Mighty No. 9 a brighter, more contemporary feel. That’s why the art is drawn in the daytime with a wide blue sky overhead.

The gear motif encircling the entire roof does well to show off the arena’s importance to robotics, and at a glance you know what you're looking at! Both of those ideas went into the Colosseum design itself.

Even a single image evokes so many thoughts and ideas, huh? I guess that’s part of the Mighty magic!

The story of Mighty No. 9 begins here at the Battle Colosseum. What exactly went down there? Just what role our hero Beck play? I bet all of you are itching to know, but we’ll save it for the next installment...

Lastly, here’s a look at a Battle Colosseum poster. These are plastered all over the place, but they’re too small to really see. A shame, really... but that’s why we’re posting it here!

Try and find out where we’ve put it, if you can!

Next, speaking of robots from the Battle Colosseum… 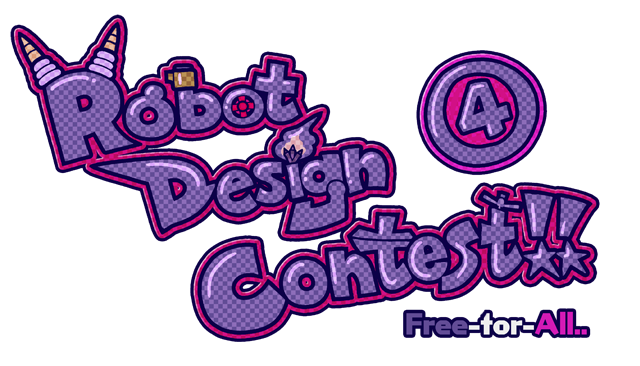 KIMOKIMO: We’re down to the final set of KIMOKIMO CUP results! The holiday season is getting in full swing, but we’ve got one more presentation to go from the last days of Mighty Month.

Now then, what presents has Santa (Sanda?) got up his sleeve for you? More than you’d think, actually; scroll to the very end for some special Mighty news!

This time around we had a whopping 68 entries in total! This round let Beckers' imaginations run wild, so as you’d expect entries took a little more time to roll in. It was worth it, though: all of the entries helped us go out on a bang! Thanks to everyone for your designs!

As always we focused on entries that would be easier to tweak. 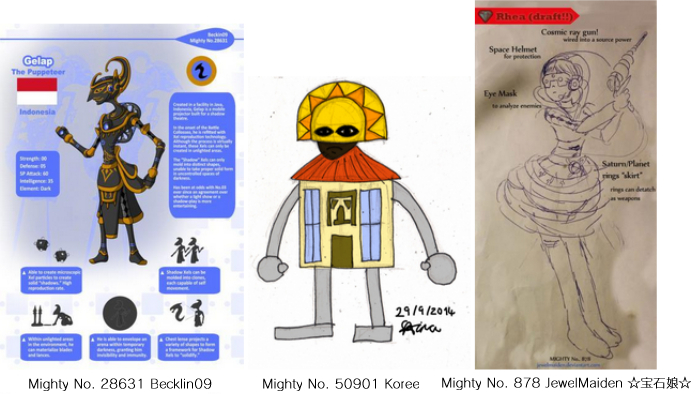 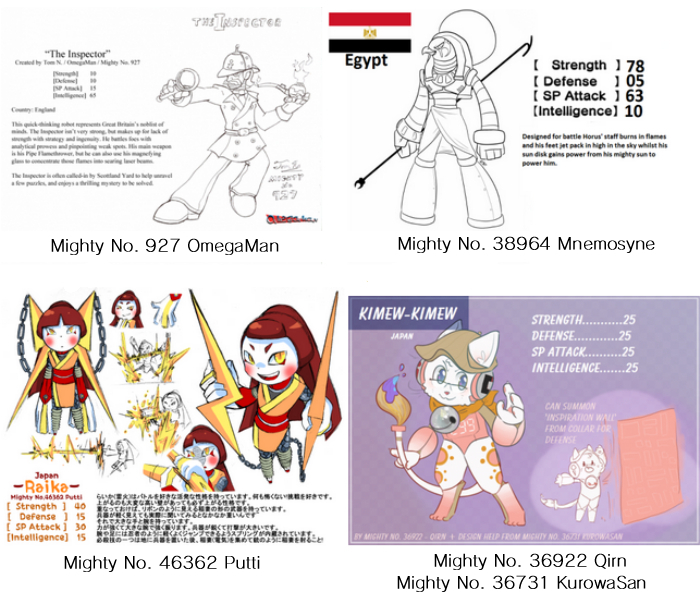 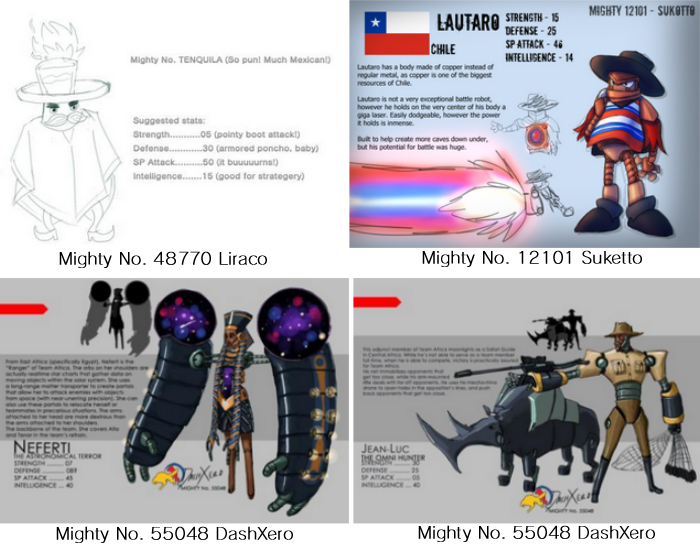 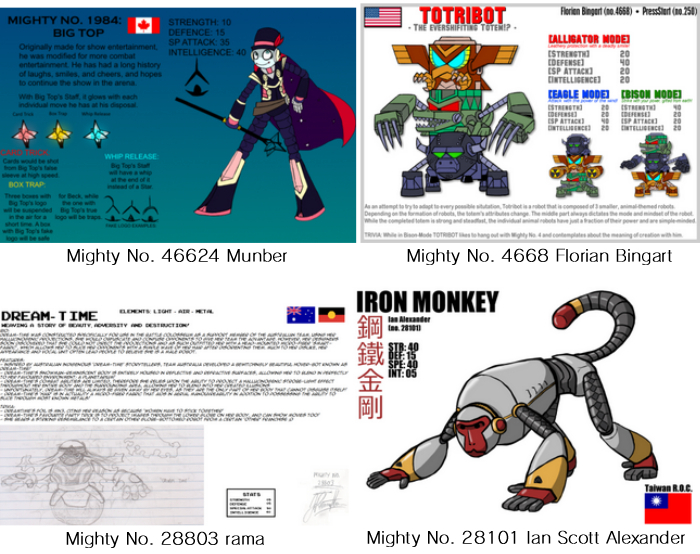 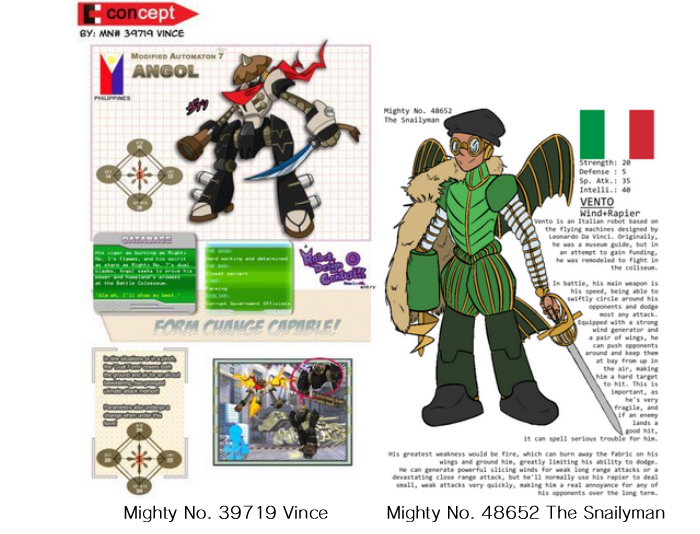 It was no small feat to choose from all of these great designs! But those bearing famous motifs and clear country representation made the choice easier.

The week 4 entries even had attack patterns thrown in. These little details were a great touch, and really got our gears turning!

Now then, who was the final choice for an Inafune finish? 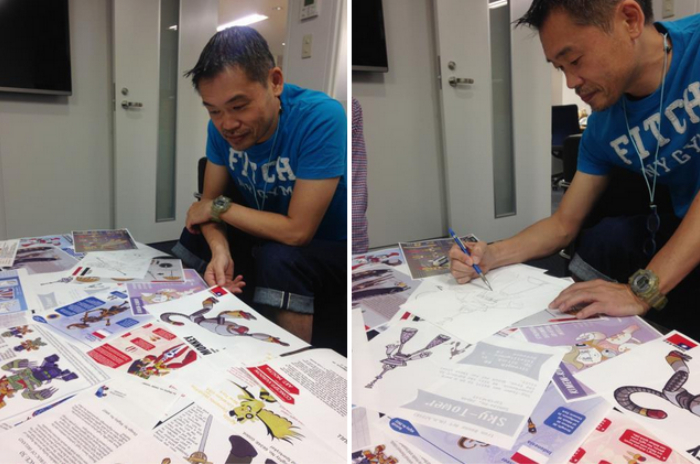 Congratulations to Mighty No. 47318 Tron Bonne! Your robot got a makeover from the man himself!

Inafune-san had this to say:

・Even if it’s a tower, such thin legs will make it look weak. That’s why I tried going for 4 legs instead. You’d get added bonuses, too, like a 4-hit combo from a spinning attack.

This time the design was drawn close to Inafune-san’s style from the get-go, so it was pretty easy for him to refine.

The overall quality of this round’s entries was too high to give much solid advice towards. Way to end on a high note!

Of course, here’s my rendition of the re-design. 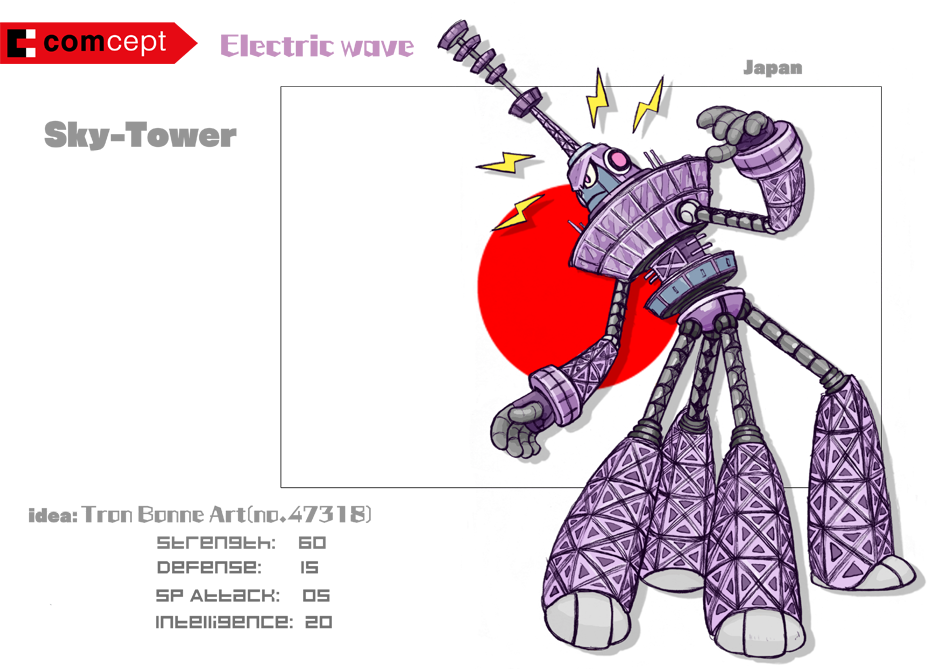 I imagined this design as a huge, towering robot, and drew it as such. Something like this could act like a home base, storing all of the other robots from the Japanese team inside of it!

And last but not least, I’m really happy to see all of the fans wishing they’d participated in these contests, and say they would participate if we held another one! Actually, I have one more surprise for those of you that have been keeping an eye on this contest.

The truth is, all of your high-quality designs caught the eye of our partners over at Inti Creates, and they have something they’d like to share with you. They’re going to take my brush-ups of the robot contest designs and use them as posters somewhere in the backdrop of Mighty No. 9!!

We’re as shocked as you are!!

Right now we’ve got five robots we’re planning to make into posters: the four weekly winners and my potato robot. There are a few more designs in the works, so next time we’ll show off those designs, as well as some of the stages where the posters will appear!

Alright everyone, see you next year!

*A note on the designs:

1) These designs aren’t being presented in any particular order,

2) The designs refined by Inafune-san aren’t the “best designs”, per se, more like designs he thought needed a little extra something to be even better,

3) We ended up prioritizing designs that were both easier to refine and best matching contest specifications.

Art Director Shinsuke Komaki has one more wallpaper for us as part of the DLC fund: the walking artillery and Mighty Numbers control tower, Mighty No. 5!

As always, this awesome wallpaper is up for sale on the Mighty No. 9 site Store page. We’d also be super stoked if you could let everyone know about it through tweets, Facebook, the works!

Lastly, we have two very important announcements regarding our Kickstarter updates:

1. There will be NO update on December 29th, as the comcept office will be closed from December 26th to January 5th, 2015. That being said, you can expect a special something to roll in the new year…

2. From January onwards we’ll be moving away from updates on Kickstarter, instead posting our three monthly updates on the Mighty No. 9 news page and forum. Once a month we’ll post a digest on Kickstarter with links to the previous month’s updates, as well as a preview for the first update of the current month. In addition, any 9th, 19th or 29th update that would fall on a weekend or Japanese holiday will be moved to the subsequent weekday.

These two changes will allow our team to get some much-needed R&R going into January, and the last stages of development! We’re looking forward to what the new year holds, and can’t wait to experience it with our Beckers.

That’s it for this update! As always, let us know what you think in the comments here, the Mighty forums, twitter and Facebook!

There were so many pretty awesome design entries in this last contest! I'm sure it was difficult to pick just ONE winner here! XD

Congratulations for the winner!
It looks pretty nice! The official update kept much of what made me love it as well^^

just think about it! in about 3-4 months mighty no. 9 should come out! best thing the new year has for me!