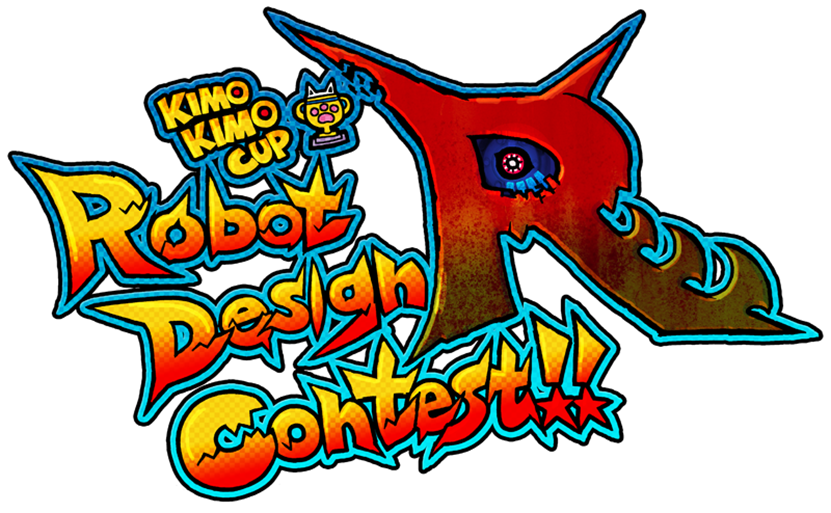 Today we are presenting a special bonus round of the contest.

This time these are not designs chosen and redesigned by Inafune-san, but are a selection of 5 robots that I wanted to work on myself.

Let's jump right inn and check them out! 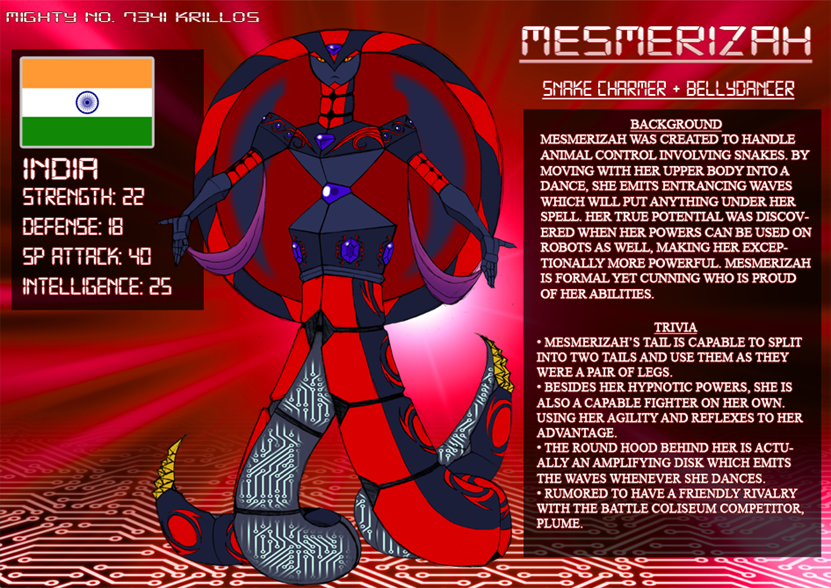 I really like this character's silhouette and it looks like this team from India wanted to invoke images of Hindu mythology and I think they succeeded. 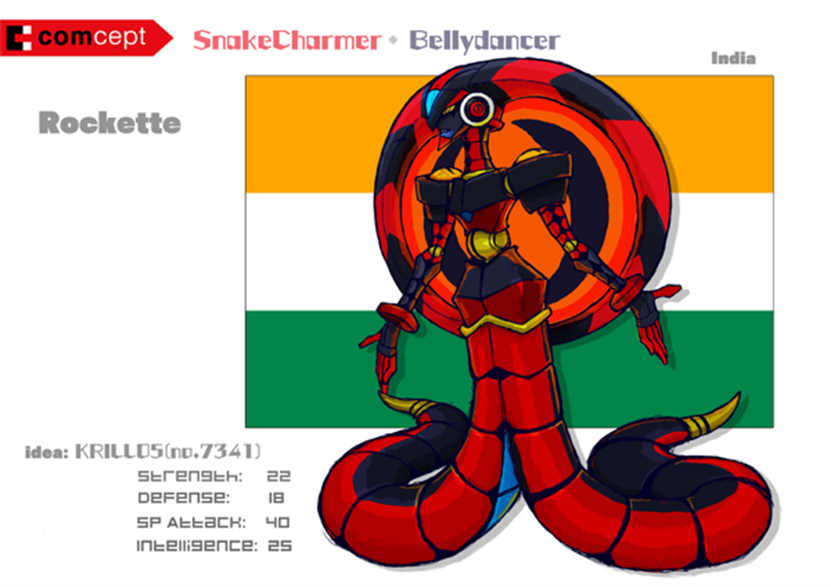 I really didn't change much in this instance!

I did add the Mighty No. 9 headphones that are universal design aspect with these robots.

In the end, the design has a majestic presence fitting for a team-leader. 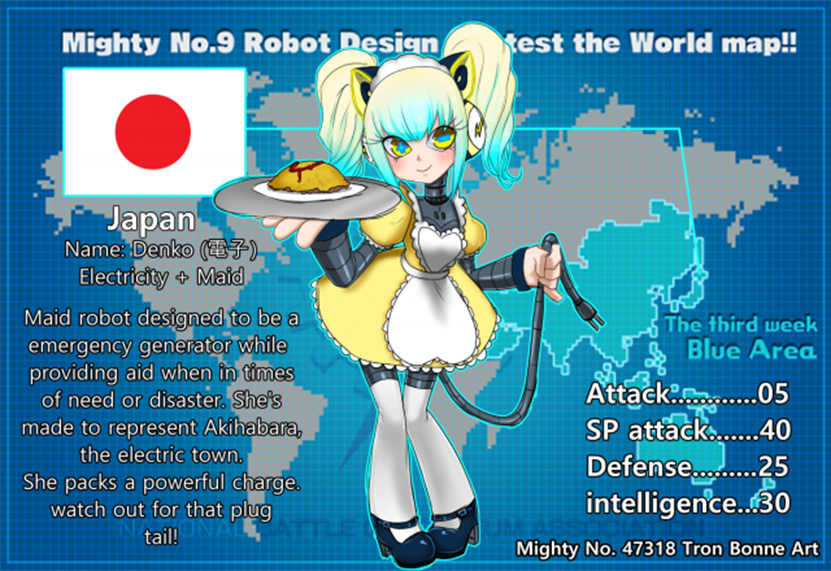 One of the recent cultural aspects of Japan are the maids that are so common in places like Akihabara, but I really don't see how serving Omlets and such in the Battle Colloseum is going to lead to victory so I redesigned it so this robot would rework Xels into recovery items similar to Patch and other support robots. 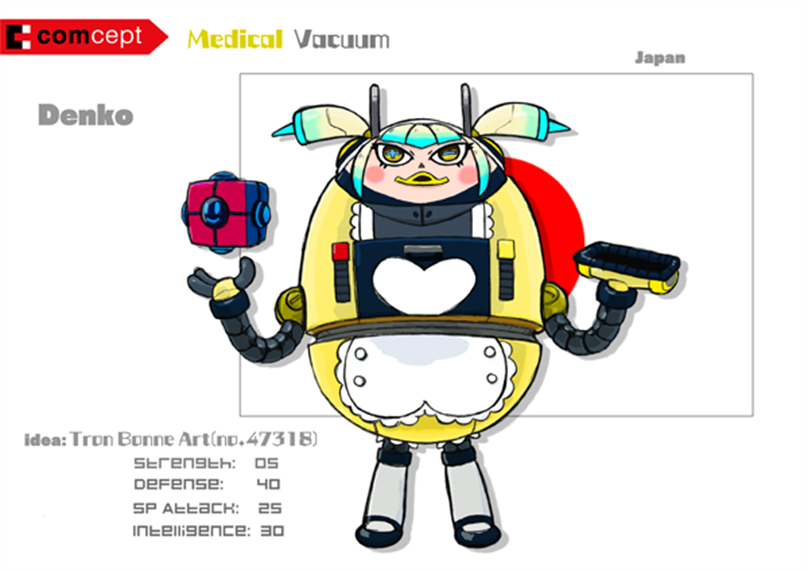 I know what you are all going to say...

I wanted to make their silhouette similar to Patch, and another point is that as a support robot there is always the chance the enemy team will attack that robot first so I wanted to give this bot a bit more of a strong defensive look.

In the end, this robot basically looks like a tiny factory for making recory items. The heart in her stomach is basically like a microwave that opens up recovery items inside. Some may disagree but I think she's still kinda cute, kinda like Humpty Dumpty or something? 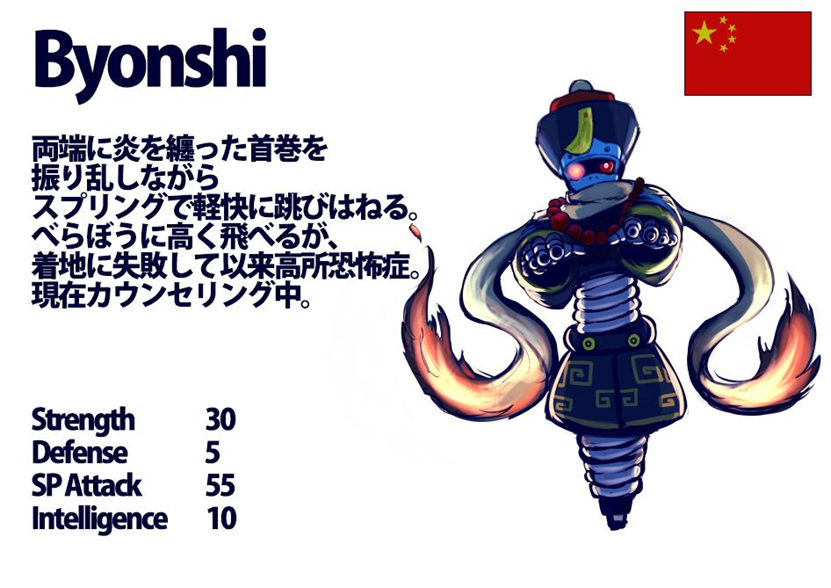 This was one of the most popular designs on both the forums and twitter! 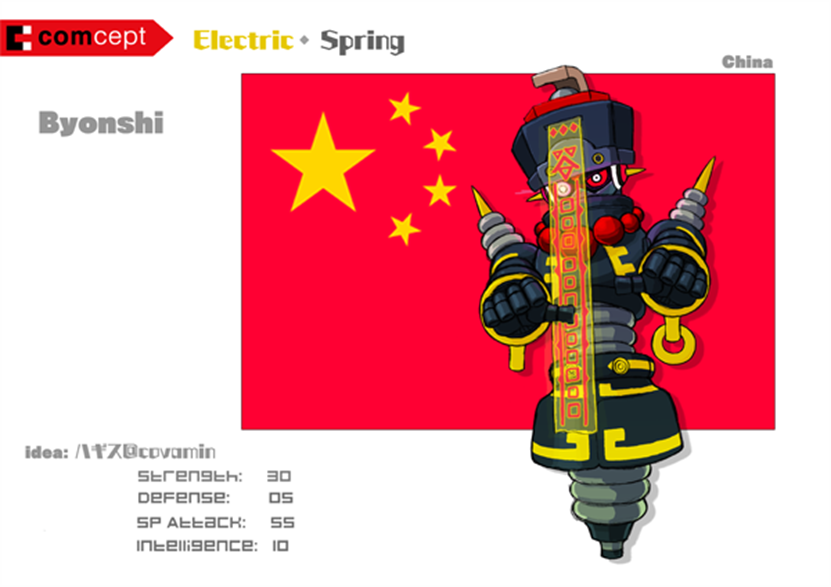 This designs is also very similar to the original, however since the spring design kind of looked like a spark plug, I changed his attack affinity from fire to electricity.

The combination of a spring and electricity works really well in my opinion, so I could see this very easy to work into a game. The Jiangshi theme is also very unique and works perfectly with this combination. 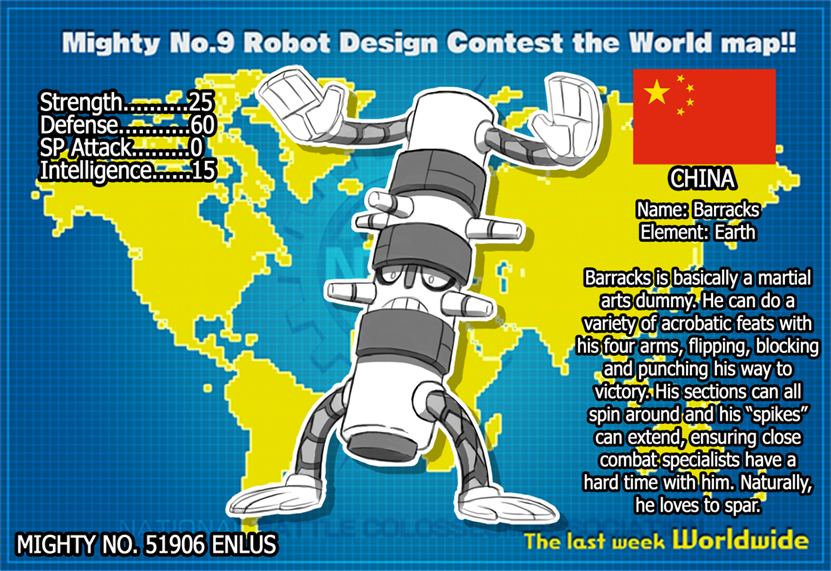 Here we have another cool design from Enlus who has always been very active. The unique design where his face is in the middle and he has hands on both his top and bottom is a cool idea and I could imagine him fighting by utilizing that versatility and switching back and forth. 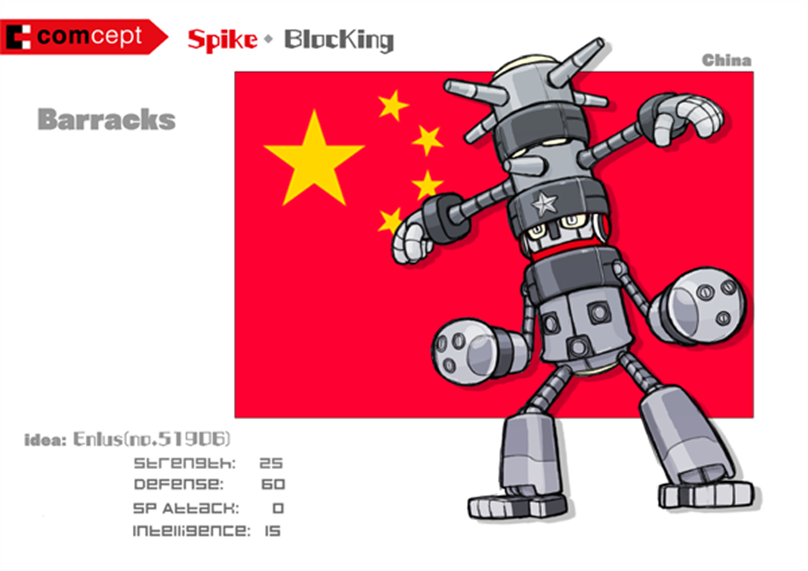 I changed this design a bit, making him look a little tougher and adding more elements similar to shaolin wooden men that are popular in Kung-fu movies and the like!

As you can see, it would be strong in a close quarters fight, as if you were fighting two people!

However, just because of it's resemblance to a training doll, I think it would work best as a boss that shows up in the tutorial. 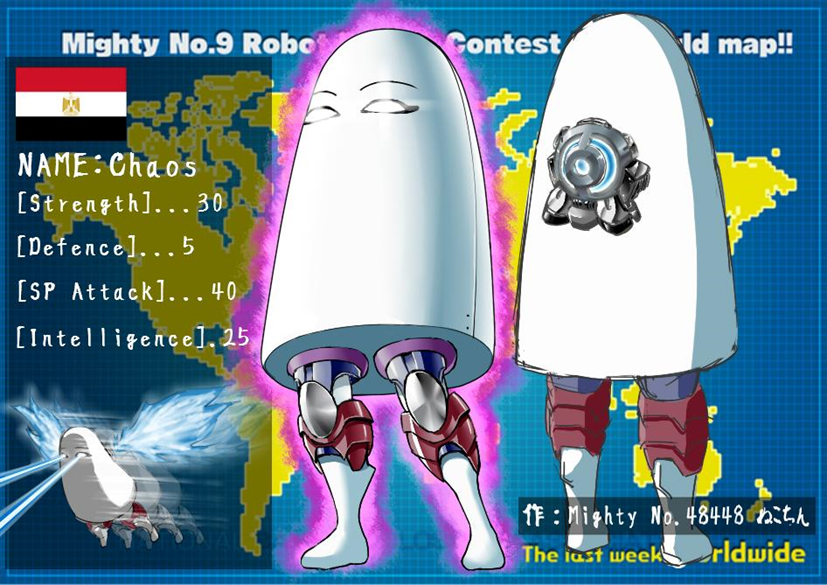 I really wanted to add another robot with an Egytian theme to this list, so I picked this one.

This is based on Medjed, which is actually fairly popular in Japan.

According to the mythology the only distingishable parts of its body are the eyes and feet.

As you can see here, with this design he shoots beams from his eyes and can fly.

It's always been kind of an enigma for Japan and has shown up as memes on the internet and appeared in videos games as well., and even I have drawn versions of him in the past. 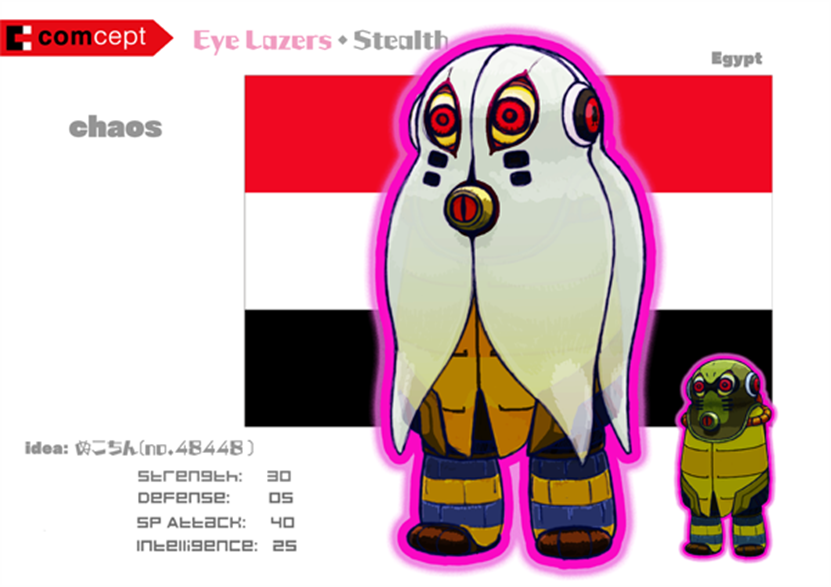 This is what my version of it turned out to be!

I tried to make him as scary as possible, and of course he looks like he shoots lasers from his eyes.

The white part surrounding him is supposed to be a type of optical camoflauge, and I thought that spreading it out might even allow him to fly.

I also made it so that he could breath fire from his mouth, so I drew the part under his mantle accordingly.

I sort of imagined this as his mysterious first form, and that even the part under his mantle might open up to have an even scarier robot inside! (thought I haven't thought that far ahead...)

Well, this is the final part in this series of the KIMOKIMO Cup! I know it was a long road, and I appreciate everyone's submissions and patience.

I know some fans are hoping we continue this tradition, so if we have a chance I would definitely like to open submissions once more!

As one final present for this Mighty Month, our Art Director Komaki-san has prepared a few new wallpapers for the fans. 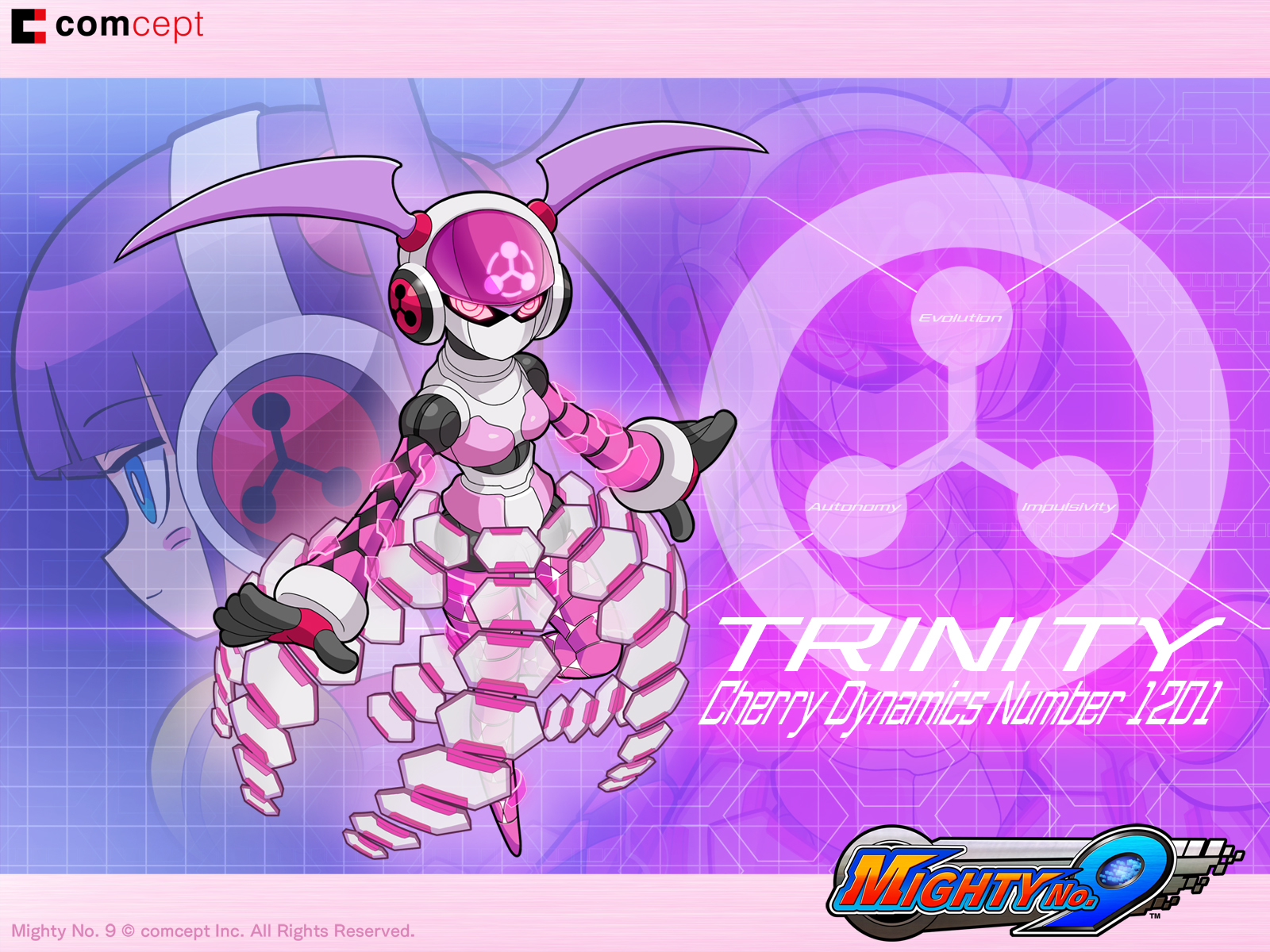 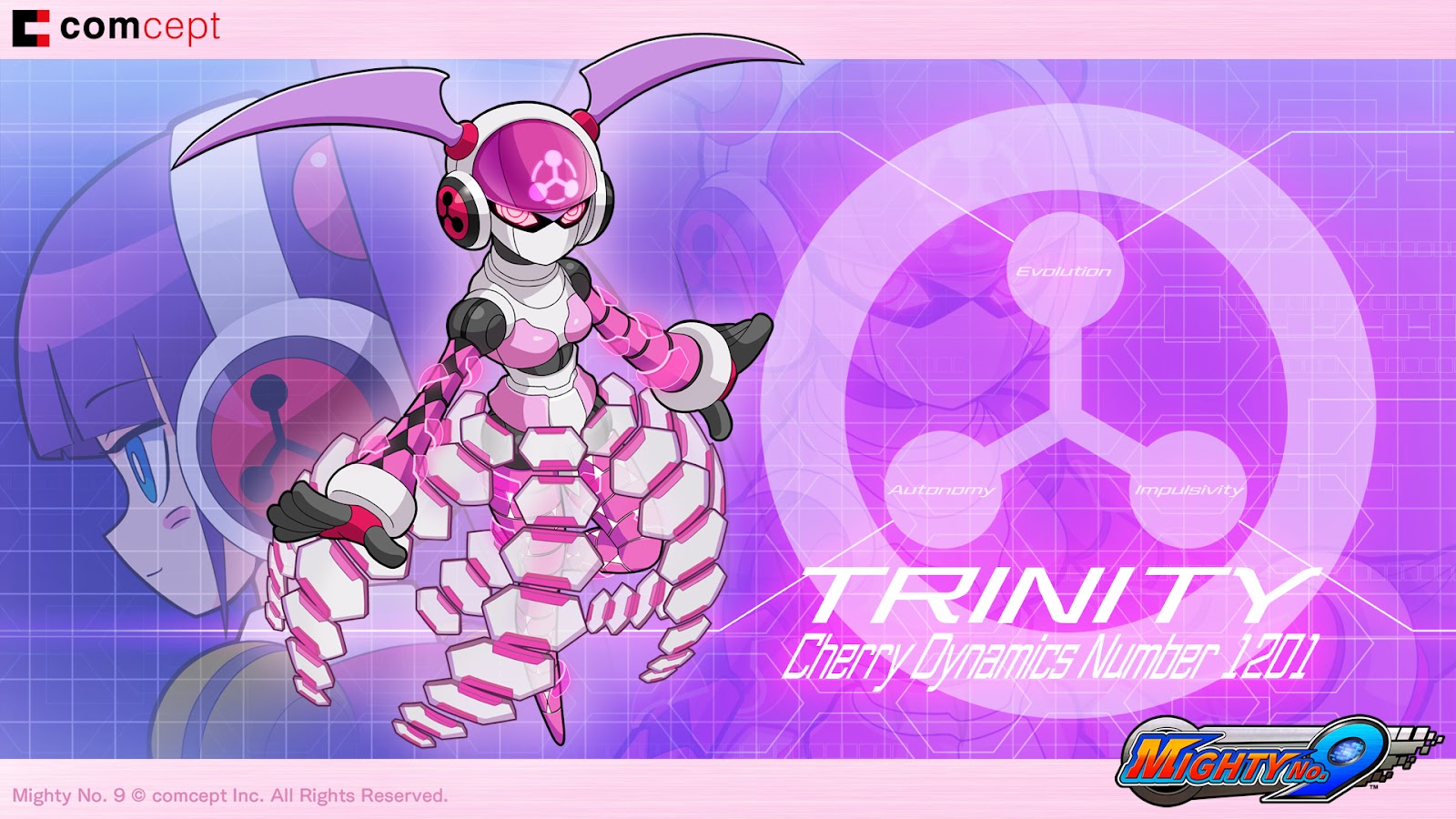 It seems the guys are back in business!
I do not know what has happened, but for those that haven't heard, the team has told us three things about Mighty No. 9:
1) The handheld versions are coming. They do not know when, and at this point I think just knowing that they are is enough.
2) The physical rewards are mostly done and will be shipped. Again, I'd be patient when it comes to when. There are estimates, but I'd just wait until I receive an e-mail.
3) A new company is underway. It's called LEVEL5 comcept, I think. Akihiro Himo is in on it. All I can do is wish them good luck. All I can do is wish them good luck in the future. I hope to see Comcept or whatever they choose to call themselves succeed. They'll probably make this public soon if they haven't already.
I'd recommend being patient until they've done what they've told us they're going to do. I mean, we've actually heard something now!

I'm going to comment on that maid picture and say that if somebody took my character and redesigned it like THAT, I would cuss you from here to Timbuktu. That looks terrible, and not at all what I'd expect from a professional character designer. How could you take what started out as a cute maid character and turn it into some horrible egg thing from my nightmares?

huh the images are gone for the most part

Sadly, we don't care that much about a contest at present!
We'd like to get the stuff we've ALREADY PAID for as a priority.
We expect an IMMEDIATE answer to all of these questions and many more.
Give feedback and show some kind of INTEREST in the backers that trusted their hearts an money years ago. We're STILL waiting...

If you're not capable of delivering our ALREADY PAID items, then just give us our money back! Full refund for everyone........