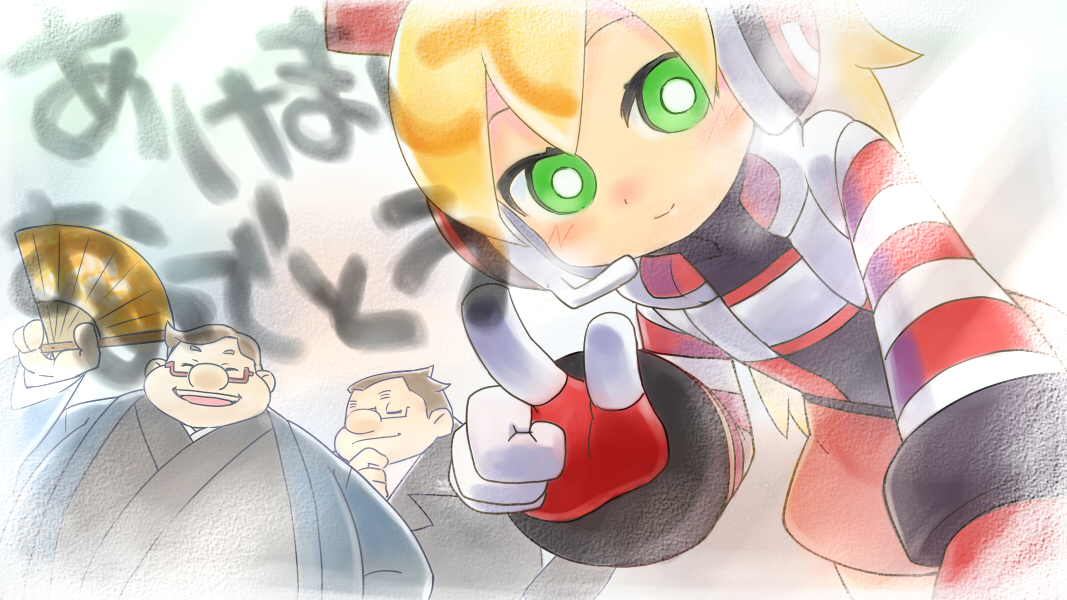 We’re inching ever closer to Mighty No. 9’s launch. Development’s coming along smoothly, and it looks like porting over to our various consoles is just around the corner. Soon enough we’ll have the whole package ready to go on your doorstep! In the meantime, keep your eyes peeled to these updates, Beckers!

Now then, our first update of the new year is all about Mighty No. 7 and the Highway stage, some KIMOKIMO Cup extras and more!

It first saw the light of day at PAX Prime last year, and from the stir he caused I’m guessing a lot of you liked what you saw from our crimson blade master!

What we showed back then was still mid-development, but what we have on display this time around is pretty much the finished product, minus some fine-tuning. 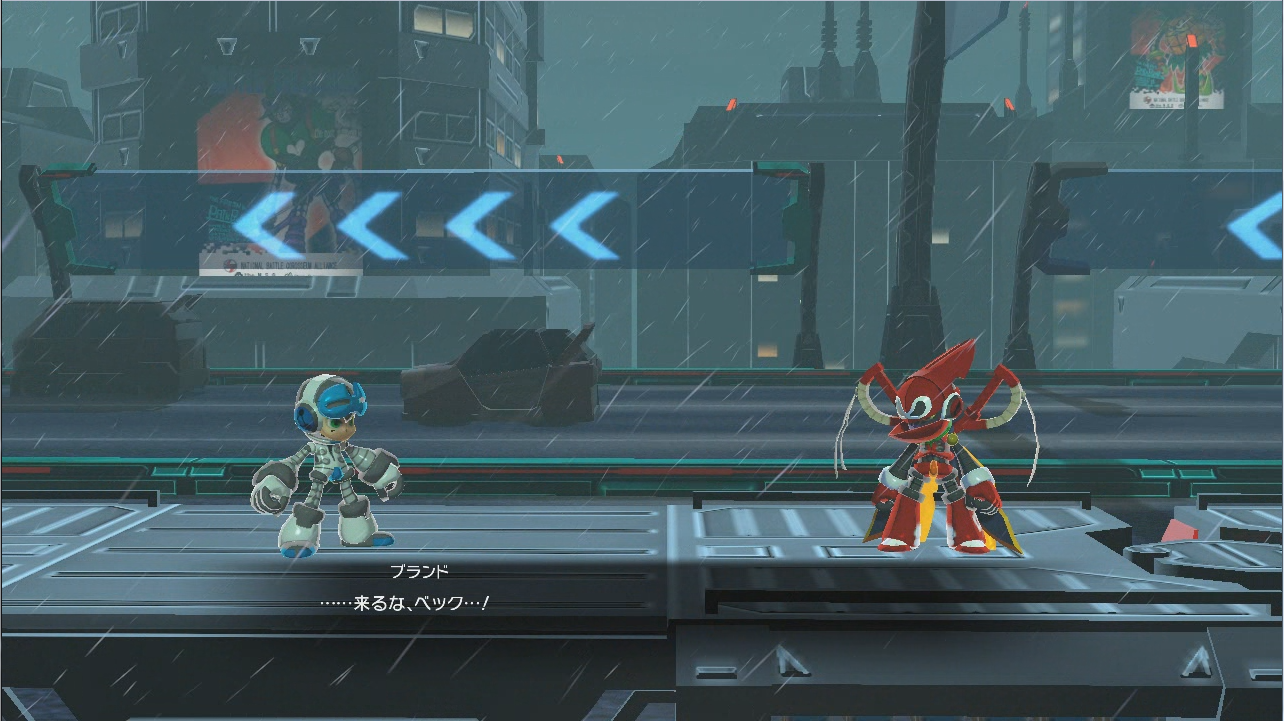 And with these ominous words the chase is on! Ignorant of the meaning behind his warning, Beck pursues the fleeing Mighty No. 7. 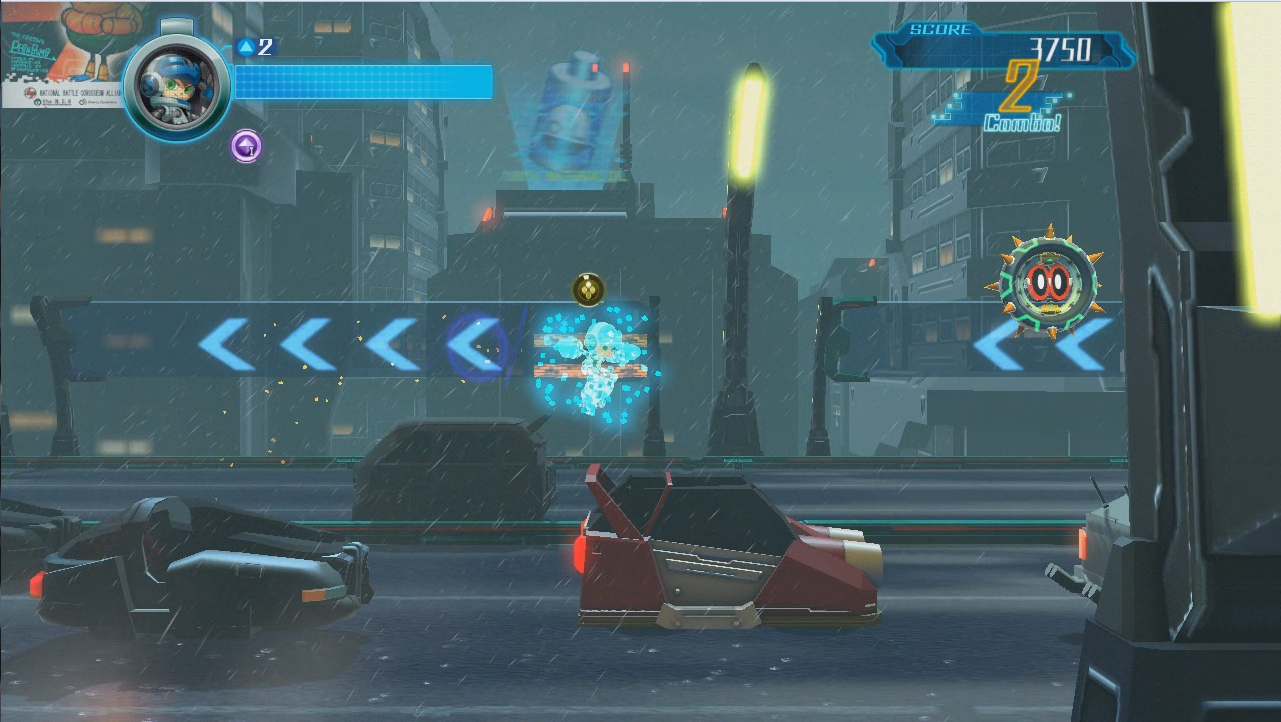 Beck must traverse over rampaging vehicles speeding along the rain-slicked highway. As one of the more recent additions to the Mighty Numbers, No. 7 boasts some impressive power. He even hurls vicious attacks down all throughout the stage! 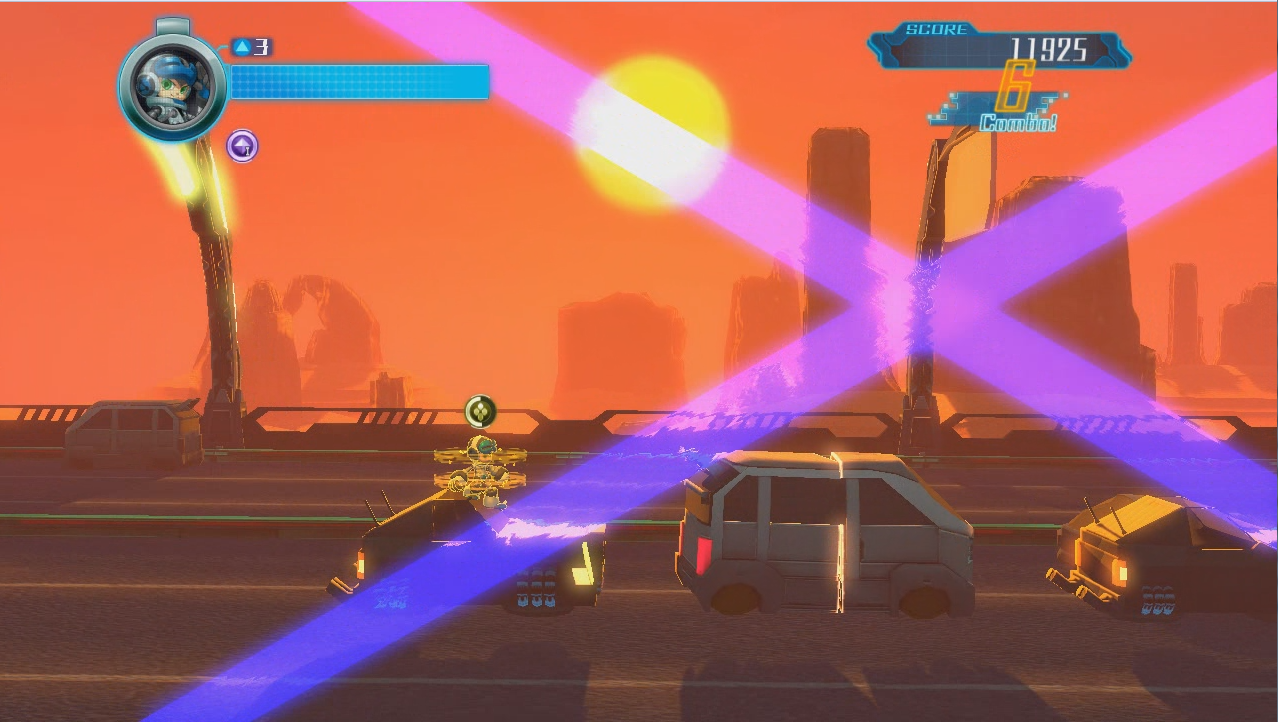 The thing is, though, the brunt of his attacks are aimed not at Beck, but at the path in front of him. Just what is No. 7 thinking!? That’s for us to know and you to find out, Beckers! It’s worth mentioning that Inafune-san gave high praise to No. 7’s in-game model and animations. ...Huh, I guess you’d call this more of a No. 7 introduction that a stage introduction.

If you can’t wait to throw down with Mighty no. 7, you can always check out the DLC for Inti Creates’ 3DS title Mighty Gunvolt! 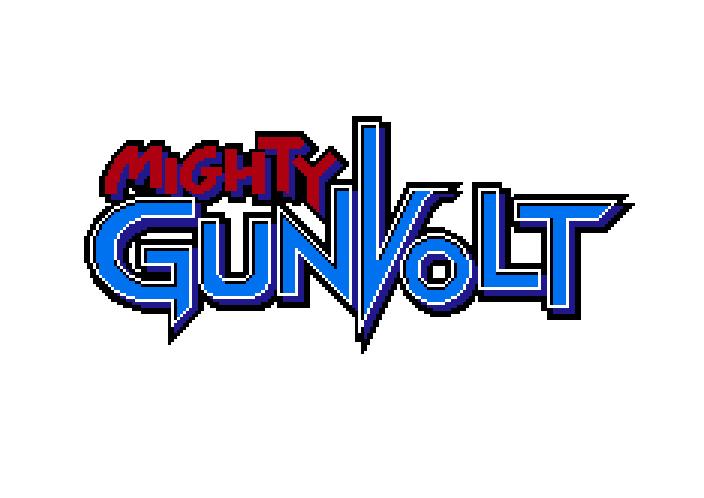 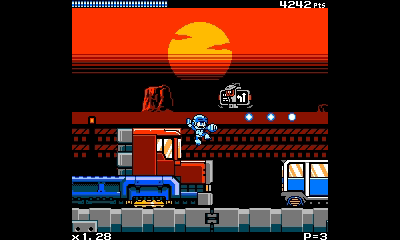 Oh, but we’re not done yet! Next up is something all of you should know a little about if you’ve been keeping up with our updates: Inti Creates had planned to use robot designs from the Mighty Month contest KIMOKIMO Cup in Mighty No. 9 itself. They’ve actually decided to put the designs selected by Inafune-san on billboards in the background of Mighty No. 7’s stage!

On top of that, they’re even including four more robot designs that didn’t make the cut for the contest! The designs from our backers were so good that we just had to ask Inti Creates to make this happen. If you don’t believe us, check out the backdrop of the Highway stage up there!

This time we’ll be showing off the four new backer robots, all of which got the same treatment as the KIMOKIMO Cup winners. Ladies and gentlemen, feast your eyes on KIMOKIMO Cup Plus! 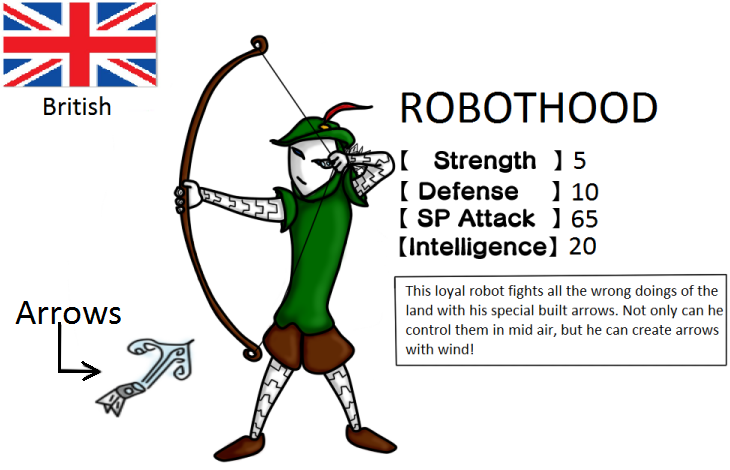 With its coherent design and cool, slanted eyes, I took a shot at this design as soon as it went up. He really fits the bill for a robot representing Great Britain! I didn’t have any INAFKING refinement to go on, so I gave the design my own brush-up. 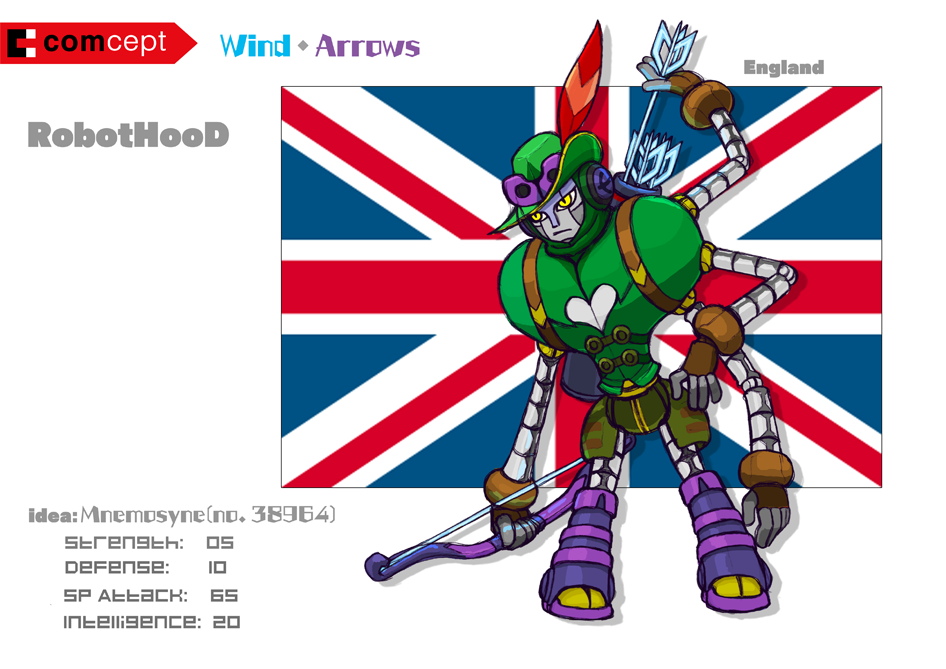 The hard part was incorporating the advice from KIMOKIMO Cup Part 3: the idea of “emphasizing its robotic nature”. One characteristic of Mighty No. 9 designs is the ability to tell the robots are just that, even if you can only see the general outline from a distance. With that in mind, I gave this robot three arms for arrows.

It can fire a wide-range triple shot, or loose three arrows in rapid succession. I made its chest heart-shaped to give it more room to draw its bow, so you can bet its arrows pack some punch behind them! I like the disconnect between the coolness of the character and the heart-shaped motif, myself.

For a second I thought it could find a rival in the Apple Numbers! ...but after I finished drawing it, I realized it’d probably be something more like William Tell. Oh well.

Onto the second new robot! 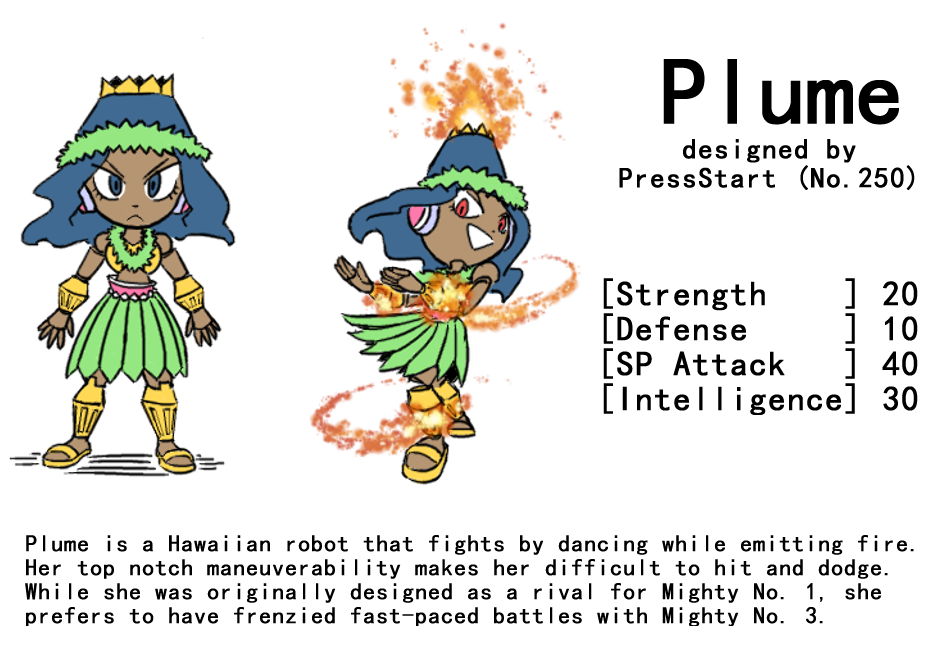 This is the first entered design that Inafune-san really took a shine to. The Hawaiian hula dancer theme was easy to understand, and its lava-spewing noggin shows off its robotic side. 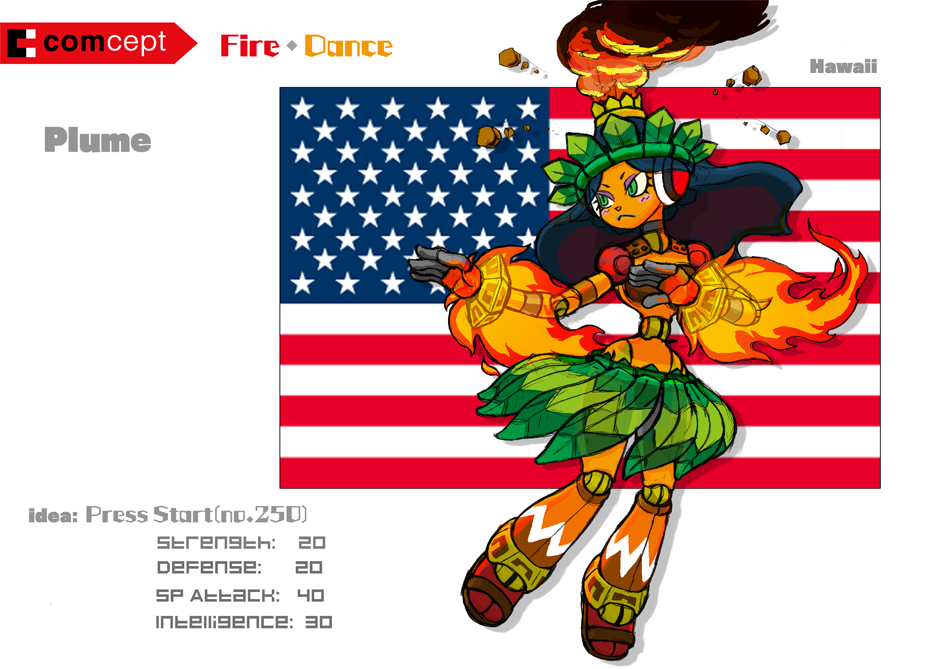 I added the same zig-zag pattern on the legs that I wanted to use for the Hawaii team. Together with the first existing member, you can start to see how this team would come together!

Next, the third new robot! 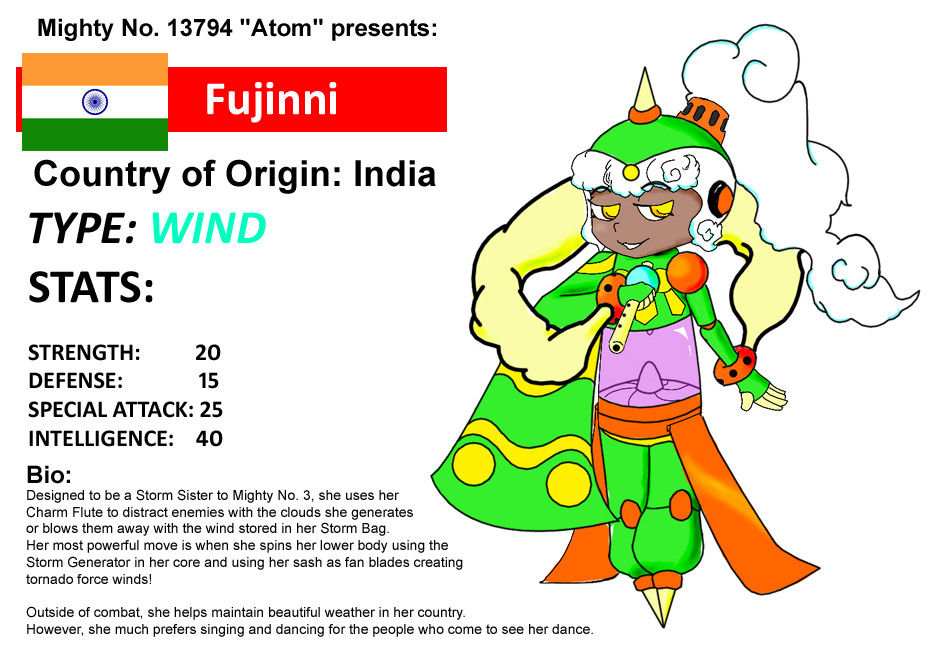 This winder user robot would make a good rival for Mighty No. 3! I thought the cloud-like ponytail was a cute touch. 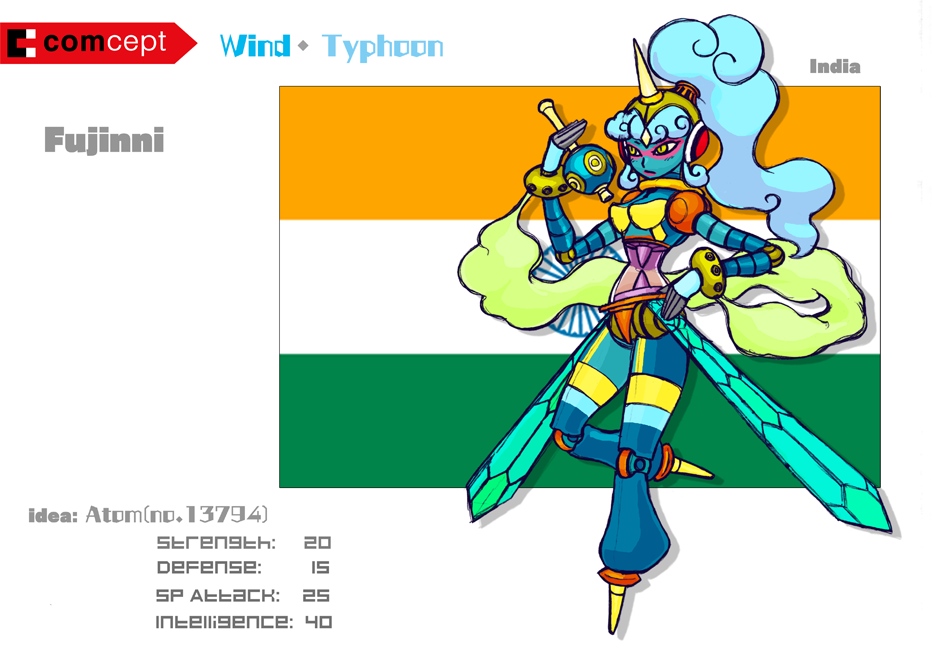 At first I stuck with the same color scheme as the original. But I found it’s easier to tell robots apart from a crowd if you group their color schemes by attribute, so I gave this character the same light-blue color base as the high-flying Mighty No. 6.

Combining this with the Indian flag coloring was quite the task, but the results are pretty striking! The wings on her hips twirl around, whipping a tornado around her lower half that she can use to move around.

And finally, the last new robot! 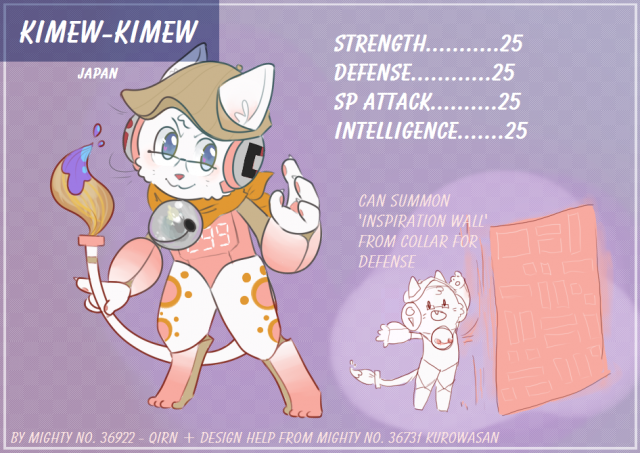 I wanted to add at least one robot as an animal mascot, so I took a shot at this cute entry! At first I thought about using a Maneki-neko motif to gel the link between the cat and Japan angles. But when I looked at the ‘Inspiration Wall’ it reminded me of Egyptian hieroglyphics. And since Ancient Egypt mythology included a cat god, I decided to go that route. 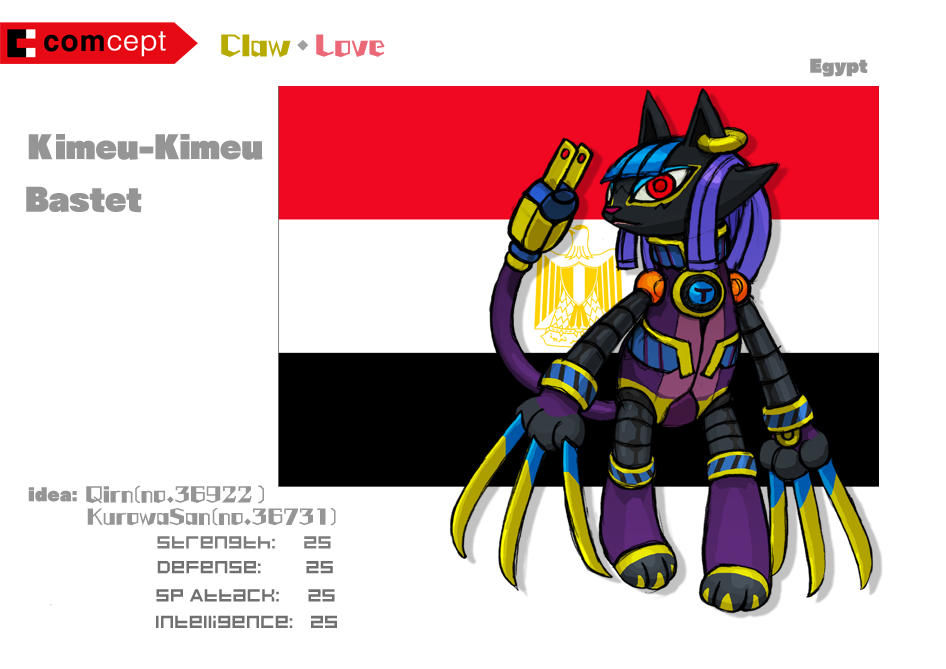 As a country representative I gave the design a tougher look, one that could endure countless battles.

It’s thanks to all of your awesome ideas that I was able to put together some of my favorite designs. There’s nothing wrong with starting from scratch, but I had a blast with the chemical reaction that occurred here, letting me brush-up designs I wouldn’t have been able to do on my own.

And with that, the KIMOKIMO Cup finally comes to a close. There are a few other incomplete robot designs, some of which 2 Player Productions caught during their last filming session. Who knows, maybe it’ll show up in their videos somewhere?

That’s all folks, thanks for reading!

*A note on the designs:

1) These designs aren’t being presented in any particular order,

2) The designs refined by Inafune-san aren’t the “best designs”, per se, more like designs he thought needed a little extra something to be even better,

3) We ended up prioritizing designs that were both easier to refine and best matching contest specifications.

Time to complete the set, Mighties! Nothing like a desktop makeover to ring in a new year, so we’ve got the remaining Mighty Numbers wallpapers ready to go!

First up is high-flying Mighty No. 6! 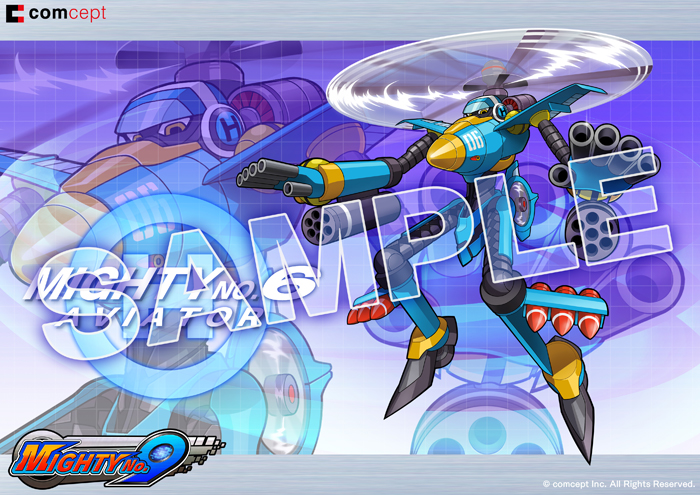 Next, cutting in on the action is blade master Mighty No. 7! 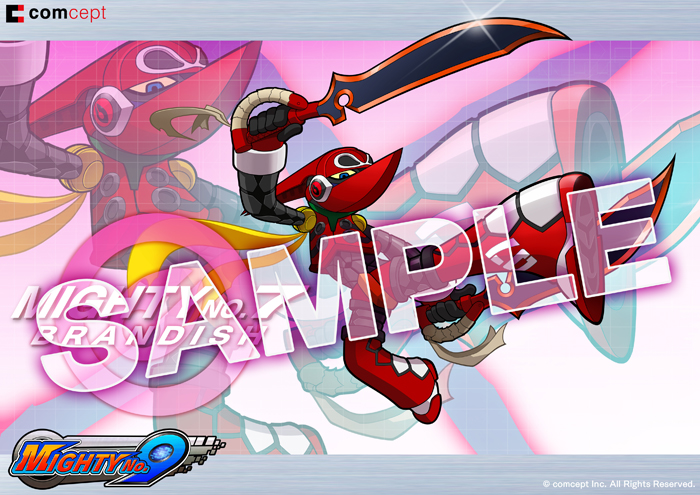 And bringing up the rear is the silent sniper, Mighty No. 8! 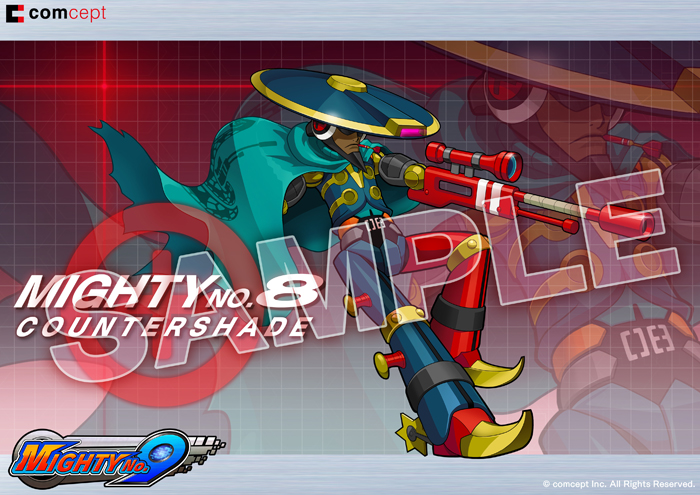 We hope you liked this update, Beckers, but we’re just getting started! The 2015 hype train is prepped to leave the station, and we’ll keep rolling out new info and art well into the new year.

Help us keep those hype engines churning, give us a shout in the comments here, on the Mighty forums, or on our official twitter and Facebook!

Can someone remind me how we'll get those wallpapers? Is that a kickstart reward, I can't remember...

You go to support to get the wallpapers.

1. I'm so psyched about Brandish's level, ooooh if we get to play as him!

Though Brandish most likely knows that he's not right in the head and not trying to hurt Beck.

2. The wallpaper are freakin' awesome and Call is cute as always.

3. Also, Dr. Sanda has a twin brother that we didn't know about?!