Now that all of our backers have had a chance to try out the most recent version of Mighty No. 9, we want to go through and detail exactly what has improved from the original Beta version that we distributed last year. 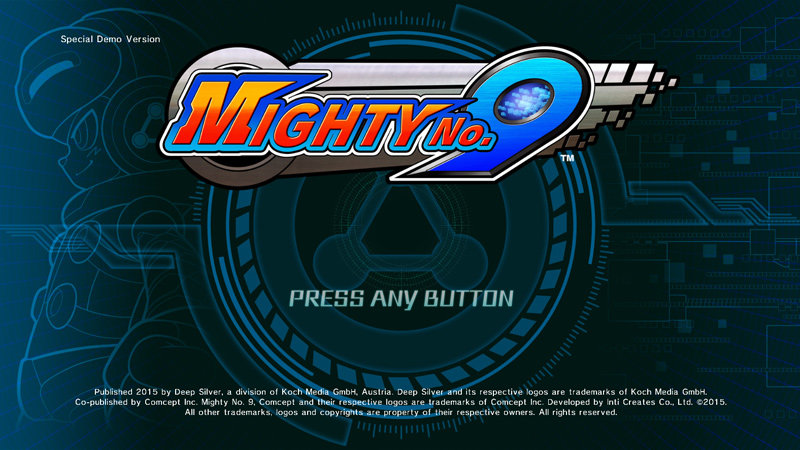 In the Beta test version there was only a simple stage select panel visible, however we have changed that to match more closely with the world of Mighty No. 9, with the idea that you are selecting the next stage from inside the Sanda Technologies laboratory. These supporting characters are a part of the overall adventure, and we wanted players to feel like they are with you for the entire ride!

Let’s go ahead and pick the No. 3 stage and see how it has changed!

Welcome to the Power Plant, now overrun by Mighty No. 3! 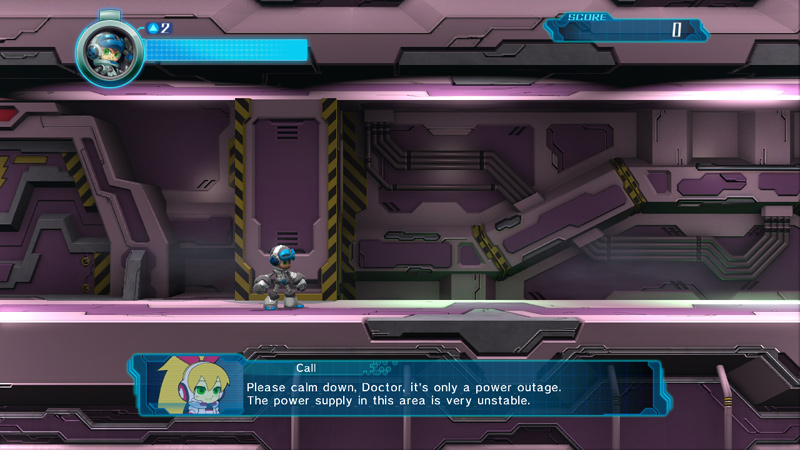 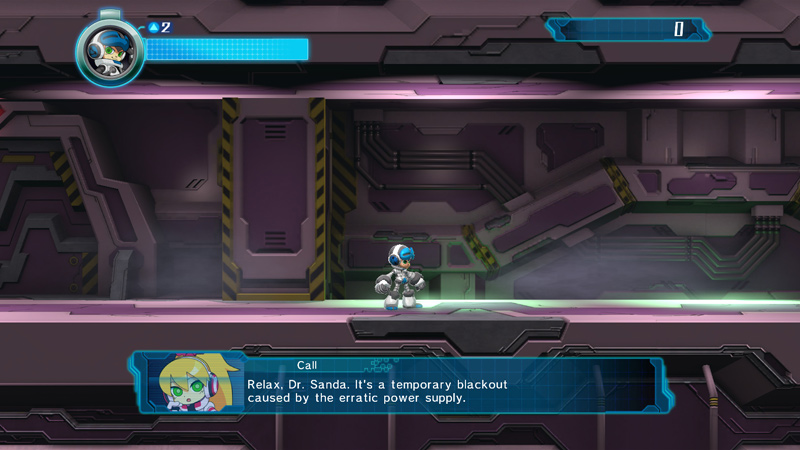 Looking at the above screenshots, you should be able to notice a few differences (and not just the fact that he’s standing in a different spot!). The biggest changes are to the backgrounds and lighting effects. No. 3’s stage is a Power Plant and we were going for a slight horror motif with the design. To match this motif, we have added some eerie green lighting and the light mist effects. We have made similar adjustments to other stages in the game to better match their themes and atmosphere. Next, let’s take a look at the adjustments to the UI. We have adjusted everything from the icon of Beck next to the health gauge and the score window to be easier to see. We also changed the expression used for Call when she gives Beck support through the game dialogue. You may also notice that the actual in-game text is different now. Previously, we were knee-deep in development and did not have the resources to have a full-fledged localization prepared, so the producer on the project did the localization work on his own! Thanks Nick! For the final release of the game, the localization was adjusted with the fact that we would be recording voice-overs for the dialogue in mind.

Now, let’s take a look at some of the more detailed changes to the overall game system. 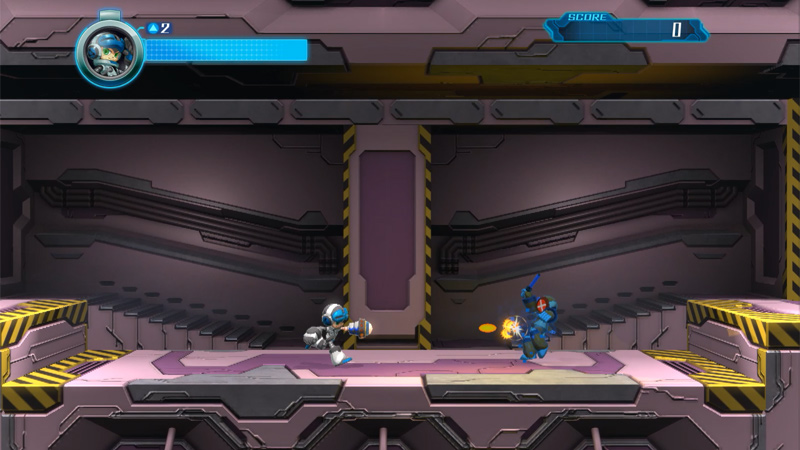 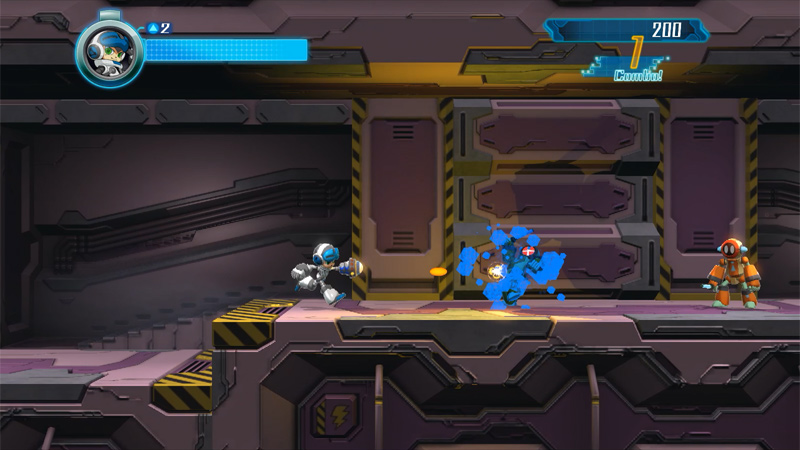 The above screenshots show the effect used when enemies are weakened and able to be absorbed. 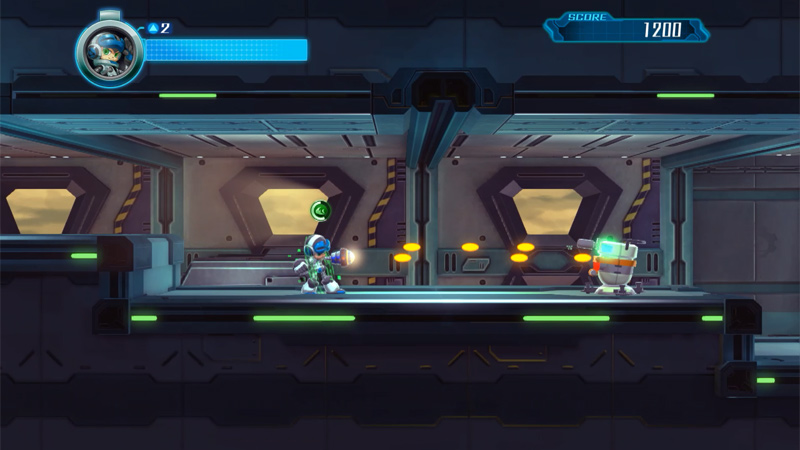 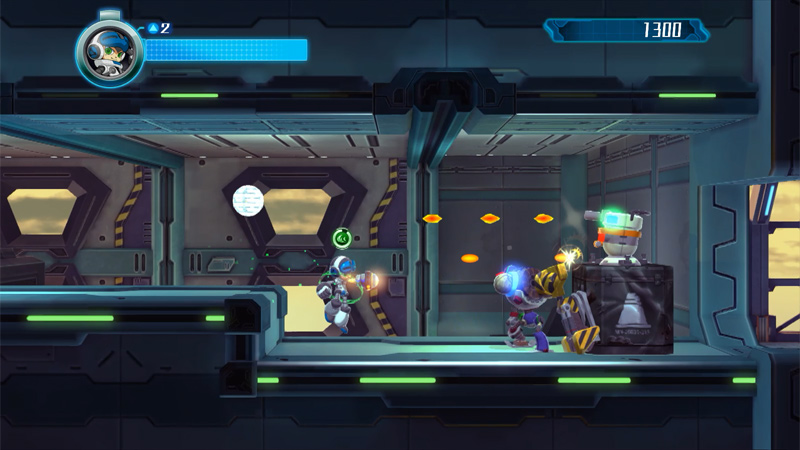 Next, we have an example from the No. 5 Stage where it is common for Beck and enemies to exchange fire. In the Beta test, a lot of players commented on the fact that the effect for both Beck and enemies’ shots were to similar which tended to confuse the player. In the final version we have adjusted the graphics for the enemy shots so that they are easier to tell apart.

Finally, let’s look at the scene where Dynatron shows up! 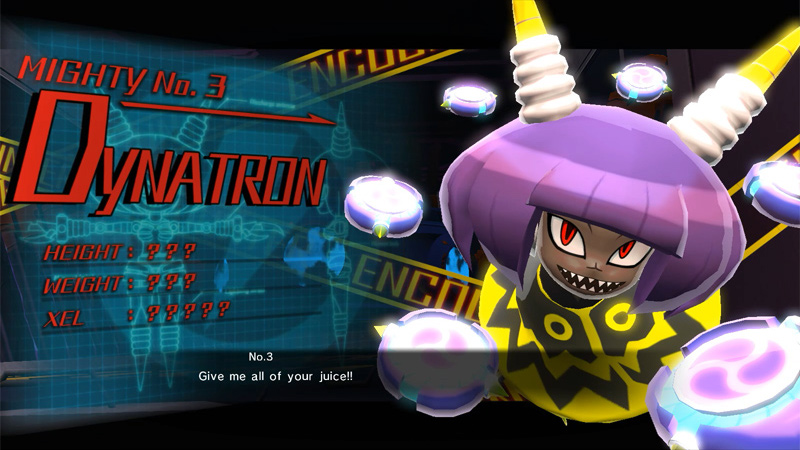 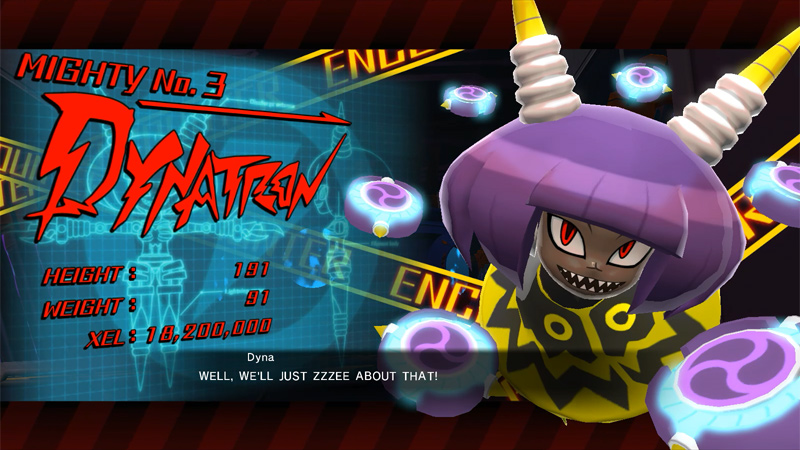 In the Beta test, the font used for her code-name was kind of plain, and none of her stats were revealed. In the final version, we have of course revealed her stats along with giving her code-name font a more stylized make-over! We always tried to add as many details to the various Mighty Numbers in order to give a larger focus on their personality, so look forward to more details like this for the other characters in the final game!

There are obviously countless other changes made to aspects of the game such as enemy placement and parameter adjustments, and other graphical polishing. We want to sincerely think everyone that helped make this possible, from the backers who sent their feedback in during the beta test to the entire team at Inti Creates who made all of the changes a reality.

※One thing that many have already noticed is that we did not include the boss transformations in this demo. You will need to wait for the full game to try those out!

I still never recieved the demo or the gunvolt code for steam, and I donated $35 :(

i never got an email with the code for the demo ;3; and i did more then 20$ on kickstarter

Technically I never got the demo code in an email as well. I however did get a email that have some instruction on how to get it. It's the Project Update #101 email, and basically it tell you to go on HumbleBundle, log in with the same email that you use on Kickstarter, then on the Purchases tab you should have a message saying You have 1 unclaimed purchase, click on it and claim the Mighty No 9 Demo.

You mean like the explosions looking worse? Pyro's attacks look awesome, but barrels and the intro stage missles look bad. Why did this change for the worse?

I just wish the beta was made available on/for Mac. I was able to try it thanks to having a (crappy) Windows laptop for work, but it sucks that I can't play it on my own computer at home.

I'm not the only one that feels what Dynatron is saying is a bit off right?

I'm actually pretty pleased with the game.  My only question is why does Beck's sprite look like it was clipped from something?  It seems like he has a grainy white aura that makes his sprite not look very smooth.

Because it was not a sprite?

Anyway, there was a certain feedback from long ago that Beck should stand out more from the background, and that rim lighting could be used to achieve that. It would appear that's what they've done with Beck's model, but not correctly and now he has a weird white glow around his body.