Mighty Beckers, good day!
And a very good day it is indeed -- the 9th, to be exact, a day each month you might have come to expect a new Mighty No. boss unveiling. But after No. 7’s formal reveal last month, we're all out of Nos., aren’t we? (...Aren’t we?)
So this time we decided to mix it up instead with a smorgasbord of mighty updates from around the Mighty No. 9 team!
Topic 1: Testing the Waters
While Comcept’s artists are hard at work continuing to craft the world and characters of Mighty No. 9, their implementation into the game itself advances at a steady pace with our partners at Inti Creates in Tokyo, under the watchful eye of President Aizu-san.
So how does our project lead and main man Inafune-san stay hands-on with the Mighty No. 9 project when so much of it is being made hundreds of miles away in Tokyo? Well, by literally going hands-on with regular builds that Aizu-san and his team deliver to Comcept HQ in Osaka for thorough playtesting and live feedback! (You might have seen parts of a previous session in this video from an earlier update.)
One recent session centered around a build featuring some new moves: a downward Dash, Backwards-Jump, and refinements to the shooting mechanic. Inafune-san took his time meticulously testing each move in turn, both on its own and seeing how each move integrated with the existing motions already in place. 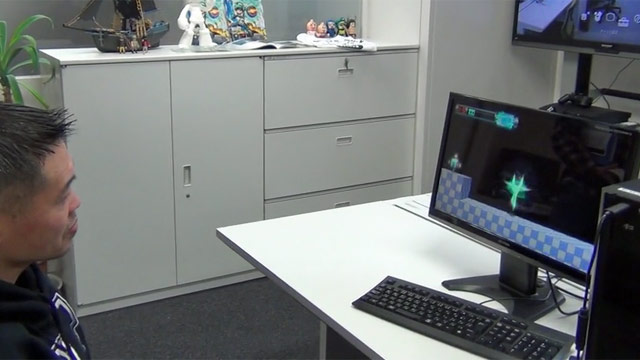 Inafune checks the new actions and animations one by one.
How’d it go? Let’s hear from Director Koji Imaeda-san and Inafune-san for the nitty-gritty...
Imaeda: I’d like to say that Inafune did nothing but shower Beck’s new moves with praise, but he did have some constructive criticism, like...
Inafune: “The dash is a fundamental mechanic in Mighty No. 9, but it still isn’t fun to do on its own. Also, we should make the backward jump look more like a distinct, deliberate action -- the current animation doesn’t really make that clear to the player.” 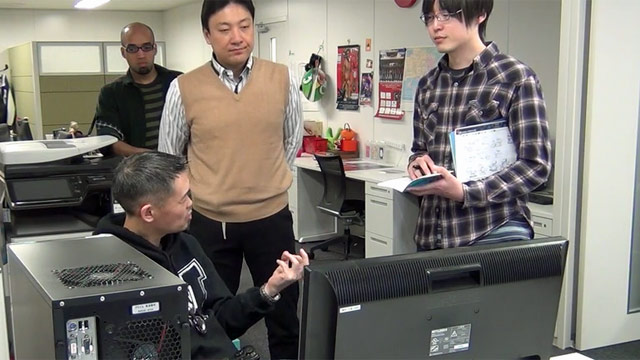 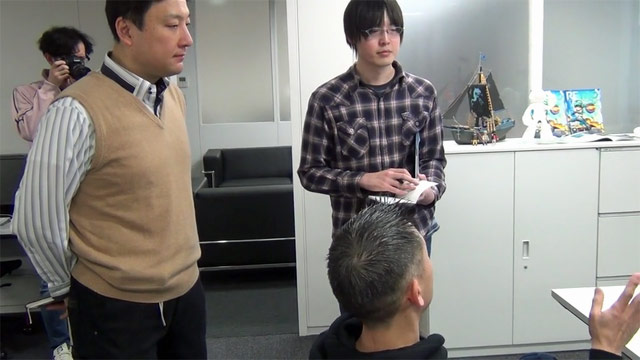 The Inti boys listen intently to every detail of Inafune-san’s feedback (as Kimo Kimo captures the moment in the background).

Inafune ends the meeting with a smile: “I’m expecting a lot from the next ROM!”
And that’s a typical play session!
Now on to another aspect of production -- stage and background creation!
Topic 2: Shedding Some Light On the Next Level...
We’ve all seen glimpses at the stage design for (what we now know as) Mighty No. 5’s military-base-style level since back in the Kickstarter days -- but where else will Beck’s adventures take him? Take it away, Imaeda-san…
Imaeda: Let’s kick off with some concept art, shall we? 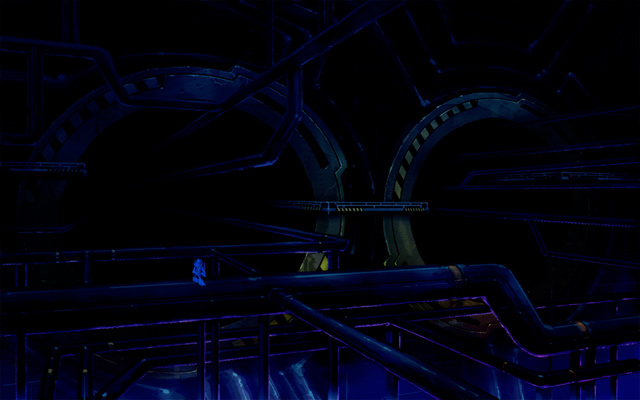 Imaeda: Oh, um… Who turned off the lights? Just a moment, please! 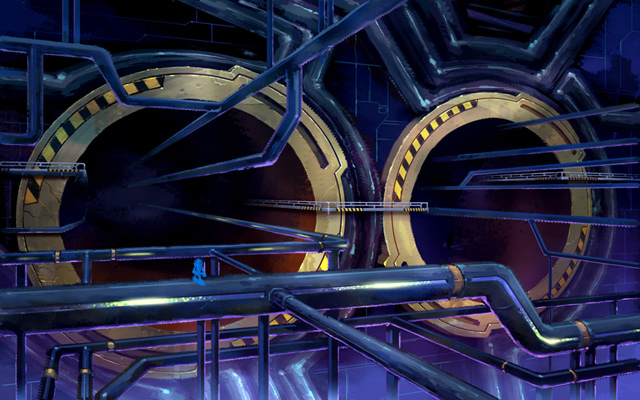 Imaeda: There we go! Much better!
Offsetting the dark colors with yellow touches is meant to give the environment a tense, oppressive atmosphere. What’s running through the pipes, you might wonder? Those house a powerful current of energy that courses through the level.
And of course that tiny blue silhouette on the left side of the biggest pipe is our ever-intrepid hero Beck, there to give a sense of the massive scale intended for this level. But wait, there’s more…
Remember earlier in the first picture, when the lights went out? That wasn’t a joke!
As you advance through the level, the power will occasionally cut out and leave you stranded in the dark. How will Beck make his way through this vast darkness? What twisted manner of enemies and traps will await him there? And which of Beck’s wicked siblings will he encounter at the conclusion of this tricky stage!? (That last one is probably not too difficult to guess…) Guess you’ll just have to wait and see...or not see, when the power is out! ;)
Topic 3: BECK’S SHOCKING SECRET PAST: EXPOSED!!
Next, a quick pit-stop at the story store -- Mr. Imaeda, if you please!
Imaeda: We’ve been really happy to see so much interest and so many questions about the scenario for Mighty No. 9 on the forums, so I’d like to take this chance to tell you all a little more about our hero, Beck.
In the game, Beck can run, dash and blast baddies with the best of them, but the truth is he’s a kind and somewhat timid robot. He was never able to display his true talents in the Battle Colosseum, and came to be seen as the weak link holding back his team of fellow Mighty Nos. Gradually he lost more and more self-confidence...until! The global robot rampage!!
Beck was the only robot who didn’t go berserk, which is why he alone is charged with the daunting task of resolving the crisis. At first Beck can’t shake his fears and anxiety, but with the encouragement of his creator Dr. White, he eventually resolves to take on the mission!
That’s all I can say for now… but I can’t wait for the day when Beck the benchwarmer turns hero at the hands of all you Mighty Beckers!
Topic 4: START giving us your ideas!
Last but certainly not least… MIGHTY BECKERS, WE NEED YOUR HELP!
First, check out these concept shots of the opening animation for each level: 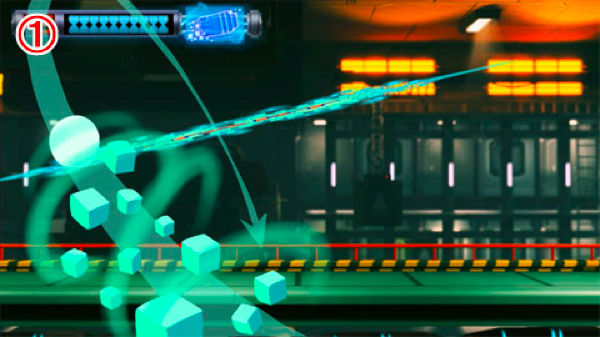 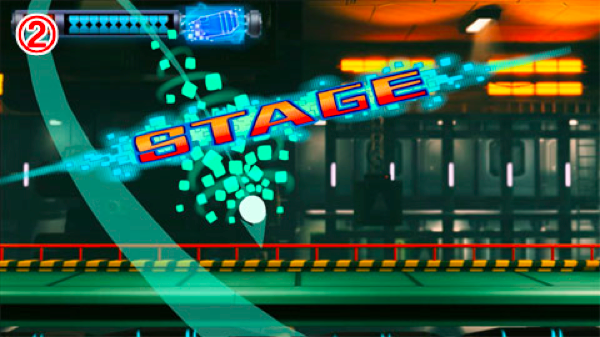 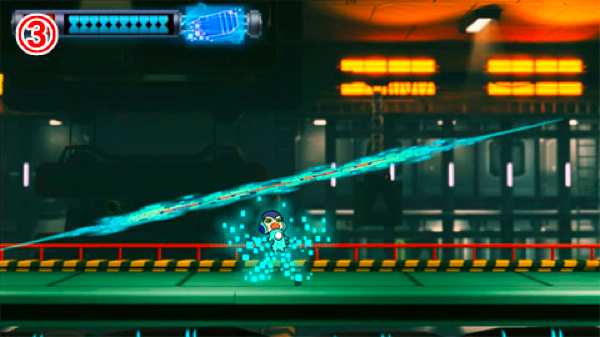 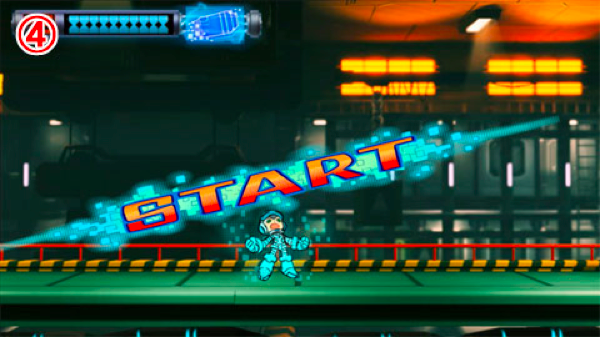 Now here’s where you come in -- what should be printed on screen where we have the placeholder “STAGE” and “START” at the opening to each level?
“GET READY” -- “GO, BECK, GO!”
“STAGE START” -- “BE MIGHTY!”
Or…? Well, what?! Those are just examples -- we want to hear YOUR ideas, so let us know! Check out this thread (alternate link here) on the forums for more details and to sound off with your ideas! We’ll see you there!
Now fly, Mighty Beckers, fly!!(｀_´)ゞ
-Koji Imaeda (Mighty No. 610), Dina (Mighty No. 1046), Mark (Mighty No. 84),  and the Mighty No. 9 Team
COMMUNITY SPOTLIGHT: Heart&Slash 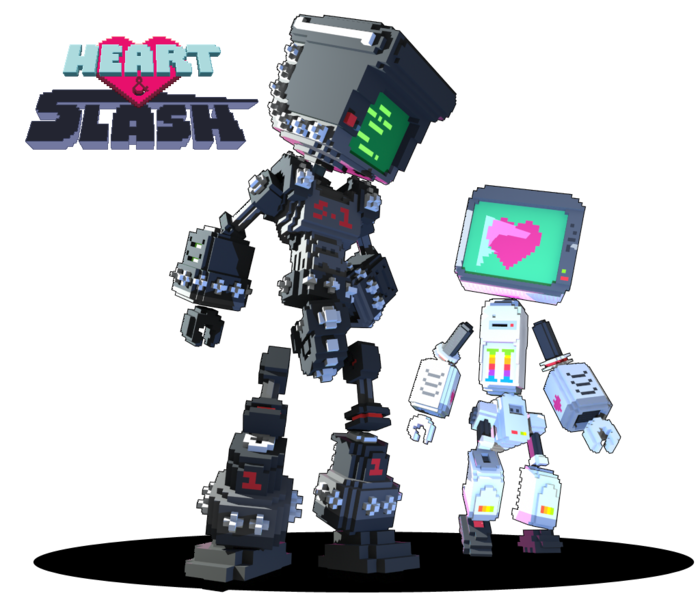 Ready to have your heart warmed?
Look no further than Heart&Slash.
This wonderful game hides a soft, mushy core behind its fast-paced, action-packed 3D robot fighting gameplay. It’s about two robots in love trying to define who they are. The game is intense and the graphics are reminiscent of the early 3D Japanese games we all know and love. The fine folks at aheartfulofgames have released the alpha to the public as part of their Kickstarter initiative, and you should definitely give it a whirl!
If you like it as much as we do, do consider pledging to this ambitious project and help them reach some of their enticing stretch goals, like the alternate bosses. They’ve already unveiled a few room boss ideas in their latest update, and they look wicked!
P.S. Just another reminder for anyone who hasn't received their forum login information yet -- make sure to email us at mightyno9@comcept.jp and we'll sort you out post-haste!

Yes i want to hear : READY BECK? GO!!! when the satge started

These stage mechanics gives me an idea about what the water stage is gonna be like.

Imagin, a water stage, that has this mechanic where the water rises and drains, like in sonic the hedgehog labyrinth zone. should up the difficulty i rekon ;)

I can't wait to play it!

Can you make a secret zone or something in any stage?

I don't really have any suggestions, but this "Stage Start" thing reminded me of MM Battle Network and MM Starforce.
"Battle Routine Set!" "Execute!
"Wave Battle, Ride On!"
I found theese quotes encouraging, and they were also catchy and fun to say.
Depending on Mighty no.9's atmosphere, using something along theese lines may or may not work, but it's something to think about.

I really like what you guys decided on for Beck's personality.  I remember a few people were concerned about him being the standard "guy who wants the fighting to stop so there can be peace, but fights because not fighting would have worse consequences" archetype, but not only did you avert that, but you came up with something that could allow Beck plenty of character development (sort of like Lucas in Mother 3 and Subspace Emissary).  Great job, guys.

"READY BECK?" "BE MIGHTY" sounds great! I think it would be fantastic if the lines were voiced acted by either Dr. White or Call.

I also like the idea of "READY BECK?" for the first placeholder, for the same reasons No 51499 gave :)
For the second placeholder, I think Inafune's idea of "BE MIGHTY!" will fit best, especially since it also resonates with how Beck is trying to gain confidence, and Dr. White is giving him that confidence. Plus it alludes the title of the game :)

I'd like to see and hear something like "READY BECK?" in Dr. White's voice. It should sound protecive and firm at the same time since Dr. White created Beck and is aware of his capabilites

that's a great idea! maybe it could be ready beck? for the first text splash,
then 'go!' for the second

Also,  what is said at the start of each stage could change randomly, or even reflect how the player did on the previous stage. Just an idea.